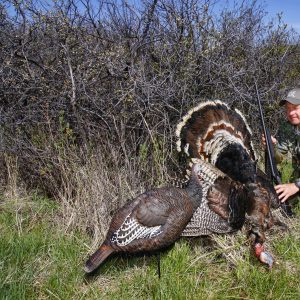 TERRAIN ROADBLOCKS TO YOUR NEXT TURKEY DINNER             Whether sneaking through the woods trying to entice a tom to answer a call or staking out a roosted gobbler, pay special attention to the layout of the land. Turkeys, like most wild critters, know every inch of their home and travel certain routes for a reason.… END_OF_DOCUMENT_TOKEN_TO_BE_REPLACED

2-MINUTE WARNING TURKEY STRATEGIES             My wife Sharon and I just wrapped up a DIY turkey hunt on turkeys that have felt a bit of pressure from other hunters in the area. Coaxing a gobbler into range of her 20 gauge took several test attempts to see what the boys wanted to hear. If you’re… END_OF_DOCUMENT_TOKEN_TO_BE_REPLACED

If you haven’t had a gobbler lock up and not give up another inch of ground toward your calls you haven’t turkey hunted enough. The rules of nature actually call upon the excited hen to move toward a gobbling tom so it’s no surprise that gobblers stubbornly wait for a seductive hen to arrive. Other… END_OF_DOCUMENT_TOKEN_TO_BE_REPLACED

Spring turkey hunting is intoxicating and I’m only days away from scratching out a tune on my Hunter’s Specialties Smokin’ Gun slate call. To get more out of your spring trip combine your feathered pursuits with big game scouting. You can even add a trophy to the trip by looking for shed big game antlers.… END_OF_DOCUMENT_TOKEN_TO_BE_REPLACED

Turkey season is closing in fast and it’s a rite of spring every hunter should experience. As I think about the upcoming season and chasing gobblers with my son I can’t help, but think about some of my favorite past memories. I remember hunting reservation turkeys with my friend David Blanton and returning to our… END_OF_DOCUMENT_TOKEN_TO_BE_REPLACED