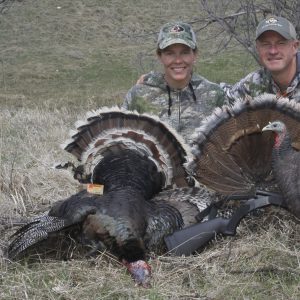 My wife Sharon and I just wrapped up a DIY turkey hunt on turkeys that have felt a bit of pressure from other hunters in the area. Coaxing a gobbler into range of her 20 gauge took several test attempts to see what the boys wanted to hear. If you’re at the 2-minute warning of your turkey hunt try these tactics. You may have to test the waters, but hopefully one of these strategies will at least turn the head of an interested gobbler.

GIVE THEM BOTH BARRELS

There’s nothing wrong with an aggressive calling strategy, especially once you encounter turkeys away from the roost. Late in the season, especially late April and early May, hens are heading quickly to nesting duties in the morning leaving gobblers with that lonely feeling. Hit with them a hard cadence of yelps, cutting and fighting purrs. You may ramp up a gobbler faster thn hoped.

SHOW THEM SOME ACTION

By action I mean you should add some action into your decoys. If you have a steady breeze your stake could make your decoy bob all on its own. I carry a string with me in case I need to give the decoy a tug from a hidden position. I also hunt prone along field edges hidden in Mossy Oak. This gives me the opportunity to use a fan and spin any decoy I have staked in front of me. Please note this disclaimer. Only use this strategy if you are sure no other hunters are nearby and never use it on public land. It could make you the target.

DIAL IT BACK TO SULTRY

Finally, if the toms don’t like the loud approach you should dial back your chatter to sound like a couple of hens scratching and conversing. Some toms, especially subordinate ones, don’t want to join a boisterous group, but they may approach to the sounds of a calm gathering.

On our hunt the third time was a charm for Sharon. Using my Sig Sauer Zulu binocular, I spotted a flock in the distance in an ideal calling location. Nearly three hours and after our third setup on this same flock (toms less than 30 yards every time, but brush issues), I dialed back the volume.

I had already called one tom into range with a hard cadence and aggressive decoy moves, but it strutted behind a brush line. After two failed attempts using this strategy I decided to dial back the volume since the flock was still within sight. One tom broke away for a closer inspection of the sultry talk, tom fan and bobbing hen. It was a loud, Hornady BOOM at 15 steps that ended his spring.

Turkey hunting is a game of chess and challenges. If one of your tactics doesn’t work it’s time to move on to the next. Remember, the 2-minute warning is about to sound!