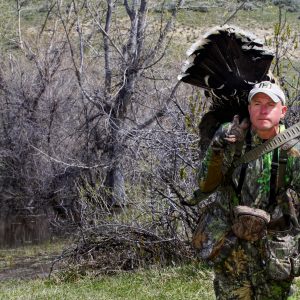 If you haven’t had a gobbler lock up and not give up another inch of ground toward your calls you haven’t turkey hunted enough. The rules of nature actually call upon the excited hen to move toward a gobbling tom so it’s no surprise that gobblers stubbornly wait for a seductive hen to arrive.

Other unseen obstacles also cause a gobbler to suddenly cement its position. Steep coulees, creeks, ponds and even fences can stop a gobbler cold. I’ve seen fences that a whitetail could walk through confuse a gobbler into pacing up and down it for a half hour in a dizzying attempt to cross through it. If you run into a locked-down gobbler that won’t budge after a hearty series of calls, quit calling before you cause permanent hearing damage to you and the turkey. Instead, circle behind the bird.

As a general rule, if you can’t get a gobbler to commit after 30 minutes of calling, he’s probably not going to come to you via the route you anticipated. Any movement on your part makes it sound like the hen is moving around and that’s good, but circling 180 degrees behind the gobbler is best. By circling around behind a gobbler you place yourself in an area the bird has recently been. Since he’s safely walked through that area he should have no qualms about retracing steps for a potential relationship. To keep track of the gobbler as you circle use your binocular and locator calls instead of turkey calls to entice a gobble. Crow caws, hawk screams and owl hoots all work to make a gobbler give away its position without tossing out another hen call. Using hen calls risks having the gobbler move toward the call during your maneuver.

After you circle, once again use hen sounds to announce your new, hidden calling position. To insure you sound like a different bird, change your call and cadence. Turkeys may only have a brain the size of a pea, but they spend their days memorizing the sounds around them, including their fellow cohorts. Hopefully you’ll sound like a hen lagging behind the flock or a fiery new love arriving on the scene.

Several years ago while hunting in South Dakota’s Black Hills I met up with a gobbler that had no notion of leaving a pine-covered hill. After quarreling with him for 40 minutes I shut up and made a wide swing ending up on the opposite side of the hill. When I called again he didn’t think twice about strutting over. Apparently it was within his strutting zone and luckily for me, within my shooting comfort zone.