TERRAIN ROADBLOCKS TO YOUR NEXT TURKEY DINNER 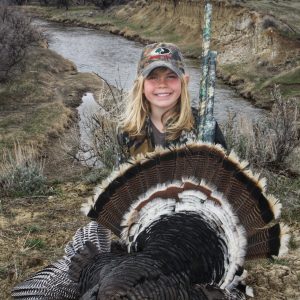 Whether sneaking through the woods trying to entice a tom to answer a call or staking out a roosted gobbler, pay special attention to the layout of the land. Turkeys, like most wild critters, know every inch of their home and travel certain routes for a reason. The two top reasons include going to favorite places and following routes that offer easy traveling with no obstacles.

Hunters chasing gobblers in hilly country know the difficulties of setting up for a gobbling bird and then trying to get the bird to climb a steep, exhausting ridge or descend into a dark, scary hollow. Odds are good the bird won’t budge, instead, he’ll gobble like crazy in hopes the hen will come to him. And in the real word, not the digital hunting world, that’s the way it works. A gobbler places himself in a position so hens can hear and see him. The instinctively programmed hen then goes to the gobbler.

Steep slopes and deep holes aren’t the only barriers to block a gobblers attempt at going to the hunter. Rivers also provide a proven barrier for most turkeys. I’ve lost count of the number of times I’ve had gobblers hang up on the opposite side of a river from me and strain their vocal cords in an attempt to entice my sexy calls across the river. All I could do was watch through my binocular while saying a prayer.

One May morning I located a gobbler across a river and coaxed him to the bank. Hidden in some brush on the opposite side, I used every call imaginable to get him onto the runway for the commuter flight. I created a ruckus of yelps, fighting calls, gobbles and wing beats. The excited tom gobbled and paced the riverbank. He even backed up a few times with the looks of making a run for flight. In the end though, we both ended up with sore throats and a firm commitment to holding our own terra firma. In retrospect I should have searched for a sandbar crossing and waded to his side of the neighborhood.

Not all water represents such an ominous barrier. Small creeks, marshy areas and ponds may slow a gobbler down, but if you can cross or circumnavigate a water source, odds are high a gobbler can do the same. While hunting with my daughter we ended up on the opposite bank of a hot tom. I set up behind some brush using our Mossy Oak camouflage to blend and commenced to calling. Suddenly we heard the flapping of wings as it flew across the creek. Seconds later the tom raced around the bush and my daughter had an easy shot with her youth shotgun. The Hornady Heavy Magnum turkey load started us down the road to great dining.

Other barriers exist in turkey country that have trademarks other than Mother Nature.  Man has been successful at creating a few barriers that turkeys find too difficult to get past. A common barrier across the nation comes in the form of woven wire or tightly-strung fences.  You’d think a critter equipped with wings would just up and jump over such a blockade, but instead, a turkey’s peanut-sized brain tells them to pace the fence like a zoo-caged lion.

As you contemplate your next setup you need to think ahead. Is there a barrier between you and your target tom? If so, you might want to readjust before the frustration of a stalled gobbler begins.