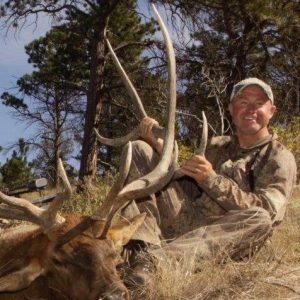 Shed antler hunting is as intoxicating to me as estrus is to a rutting bull elk. At the moment I didn’t have time to think about the addiction, future hunts for owners of the found antlers or decorative antler ambiance. I was focused on staying upright and for some reason the song lyrics “slip sliding… END_OF_DOCUMENT_TOKEN_TO_BE_REPLACED

Spring turkey hunting is intoxicating and I’m only days away from scratching out a tune on my Hunter’s Specialties Smokin’ Gun slate call. To get more out of your spring trip combine your feathered pursuits with big game scouting. You can even add a trophy to the trip by looking for shed big game antlers.… END_OF_DOCUMENT_TOKEN_TO_BE_REPLACED

It’s official! My elk bowkill with my Mathews No Cam was measured by a certified B&C scorer last weekend and came in at 378 3/8 gross points with a net at 367 5/8. I’ll admit, I did do a bit of celebrating since it’s still my top DIY, solo, public-land trophy. What astonished me even more… END_OF_DOCUMENT_TOKEN_TO_BE_REPLACED

SNOW REVELATIONS SHOT Show is looming, but with a pile of fresh snow hitting the ground it was a great time to check out some hidey holes and see how the big bulls were wintering before the big show. The fresh snow didn’t disappoint. It’s been an open winter so far and the bucks, and… END_OF_DOCUMENT_TOKEN_TO_BE_REPLACED

MORE THAN ONE WAY TO WIN This past weekend I put in a valiant effort for coyotes. Yep, they won, but there’s more than one way to win in the hunting game and after I did some soul searching I patted myself on the back for winning in another arena. That arena was in the… END_OF_DOCUMENT_TOKEN_TO_BE_REPLACED