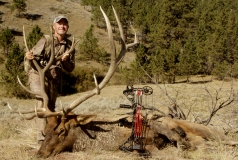 It’s official! My elk bowkill with my Mathews No Cam was measured by a certified B&C scorer last weekend and came in at 378 3/8 gross points with a net at 367 5/8. I’ll admit, I did do a bit of celebrating since it’s still my top DIY, solo, public-land trophy. What astonished me even more is the fact when I looked back at my chicken-scratch scoring right after the hunt I was surprisingly close. My first attempt, when he was still sporting a cape, came in at 379 4/8. After I got him cleaned up I took my time and noted a score of 377 3/8 points. That’s one inch less than the official gross score.

That’s not to brag, but to prove a point. I’ve never taken a scoring class in my life, but with some redneck practice and a flexible tape measure that you wouldn’t find on the set of “This Old House,” you can get close with your scores. None of this is important if scores don’t impress you. Live long and prosper. But today so many hunters throw big game trophy scores around like they are measuring a cup of flour. More than once I’ve been looking at the same deer through my Nikons with someone beside me and our field-judging was as different as Trump and Clinton (trust me, there’s a lot of difference between those two cats). 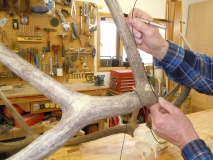 For me, that’s the most important reason to score a few heads. It gives you reference when you’re in the field and you do encounter a nice buck. You’re armed with the knowledge and experience to quickly field-judge a buck, and decide if it is a shooter or not. Of course, looking at the body to determine if a buck is mature or not also comes into play. In many fair-chase scenarios though, when you see big antlers, you usually shoot. I know I’m sending a Hornady bullet or a Carbon Express arrow downrange!

I take field-judging practice one step further. Whenever I’m at a Cabela’s store or local sporting goods outlet I field-judge bucks mounted on the wall. It’s especially gratifying to judge them from a distance and then walk up to see a score posted on the plaque below a trophy, and see that you are in the ballpark. I do the same with racks I have hanging at home. In that case I know what many of them score, but by staring at them day after day (yes, I daydream a lot in my office) it burns a mental image in my mind. When I’m in the field I can mentally place one of my bucks or bulls up against a buck, or bull in my Nikon spotting scope. I’m usually pretty close.

I’m more than excited about the score of my 2015 bull and now that it is on the wall I can look at over and over again to hopefully match it up against another bull on another hunt. That’s my plan anyway! Live long and prosper!