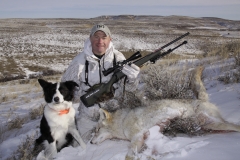 “Be patient young Skywalker.” You may want to heed this sage advice from Obi-Wan this predator season. I had to use a bit of the Force this past weekend to get a coyote to show up. Due to family obligations I only had time for one setup Sunday on public-land coyotes I knew had already been pressured. Thinking like a coyote, I snuck into a public parcel in the dark and was settled before shooting light. When I figured I could see a sneaky coyote slinking through the sage I howled a series imitating two young coyotes talking to each other. After 15 minutes I added in some magpie and crow clatter to mimic birds trying to scavenge a meal from Wile E. Coyote. Thirty minutes in I still heeded Obi-Wan’s advice and howled again. With 40 minutes into the setup I have to be honest. I started to think about pancakes, but a peering coyote from 150 yards out canceled the IHop daydream. The coyote exhibited paranoid behavior as it peered through the sagebrush, but fortunately it was looking straight into the sun. I kept my dog Sage out of the game and when the coyote turned I dropped prone, settled my Nikon BDC reticle and sent a Hornady SST from my Bergara 6.5 Creedmoor for a watermelon-smack ending. Yes, Star Wars fever is raging across America, but you can find some good hunting advice even from a Hollywood hit. May the Force be with you! P.S. Temps in the teens, but cozy in my Cabela’s layers and hidden with Mossy Oak Brush snow camo. 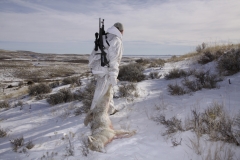